HeatSync Labs is a hackerspace in Mesa, AZ. every time i go there, i notice the existing logo… there’s nothing wrong with it, i just don’t know exactly what it means and so it makes me think about it.

i assume it’s mainly a sun since we live in the valley of everlasting frigging heat, and the arrows are some sort of “come-together” analogy. anyway, thinking about the flame style in the logo started a chain reaction in my head that ended up with me wondering how a logo of a Phoenix made of a heat-sink would look. if the mythical Phoenix could dissipate some heat, perhaps they wouldn’t burn up after laying an egg!

i spent a morning playing in Adobe Flash (i find Flash easier than Illustrator for drawing vector art quickly). what i ended up with was a radial heat-sink inspired body/head, with the tail meant to represent a TO-220 packaged component mounted to the bottom (it’s leads folded over and elongated).

neat, but it didn’t scale down well. i tried simplifying the design but it lost it’s meaning or overall style with each attempt. i finally ended up with just a modified upper portion of the head & body. though it’s no longer immediately recognizable as a Phoenix, it retains the heat-sink look and does originate from the full-symbol (which could still be used as a watermark or overlay in certain scenarios).

finally, i wanted to make something with the design… something more interesting than a business card. i thought the design would feel at home on a propaganda style poster, so i spent a morning in Photoshop and came up with this: 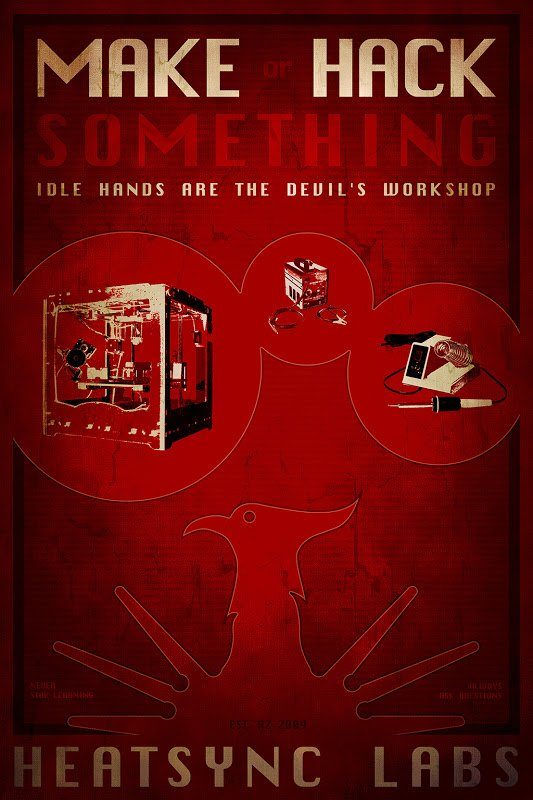 so that’s it; a random thought turned into a design project. i actually learned a couple new things in Photoshop while doing this, so it was a worthwhile endeavor!