at first, i approached the donkey from behind….

i already had some LED strips that i was planning to use in the donkey. my thought was that if i put them inside of him, light would pour from all the little welding holes. i figured i could just open him from an existing seam on the bottom, shove everything inside, drill a hole for a power port and be done. so i cut a few weld points, and was able to roll back the metal without much damage. 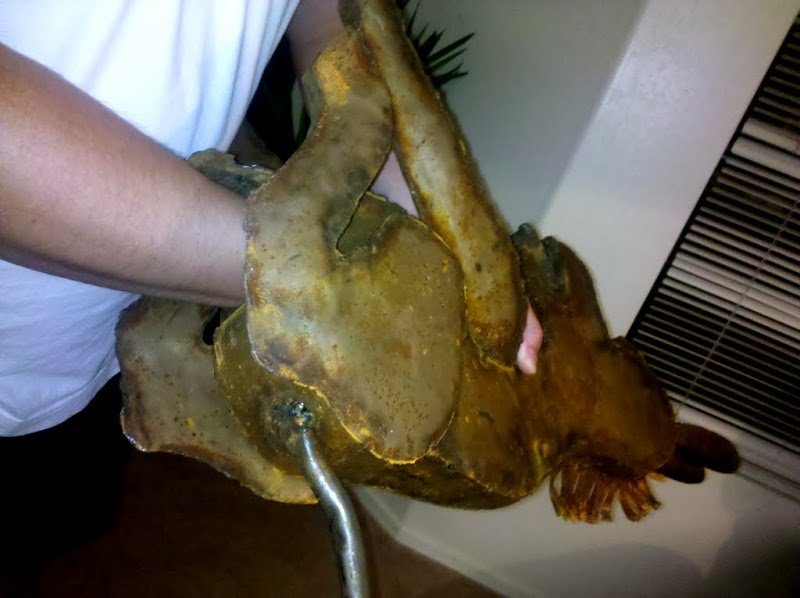 turns out there weren’t nearly enough holes to really “light up” the donkey as planned. weak. also, as the plans for the donkey grew more complex, i realized i was going to need to really get inside in order to mount things. so i cut off an entire side! 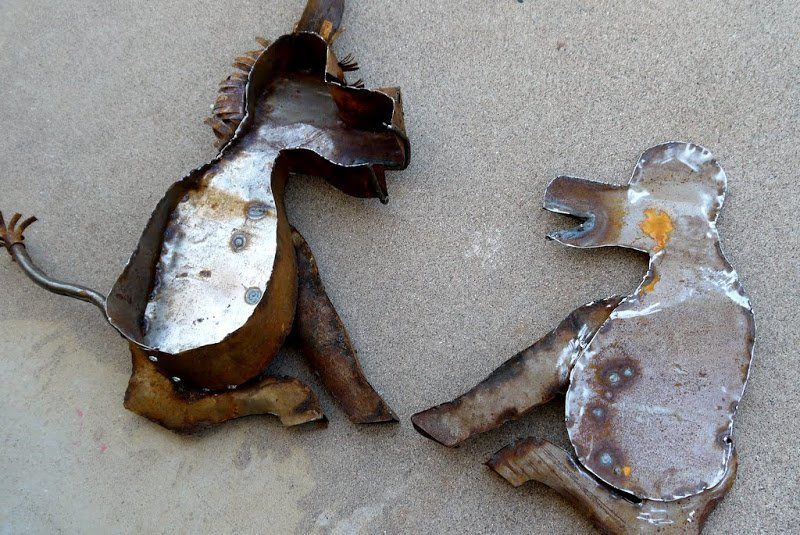 this turned out to be a huge PITA actually. i used a Dremel rotary tool and several cut-off wheels to cut through many of the welds. then i thought i was just going to pry him open and the rest of the welds would pop loose. ha! though the welding looked to have been done by a blind one-eyed special kid while riding the short bus on a bouncy road… it was actually holding strong. i ended up having to go around the entire circumference with the cut-off wheel.

my welding is even worse than that blind kid’s

i bought some 1/2 by 1/8 steel and cut off little strips a little over and inch long. i then bent each strip in the vice into an “L” shape to make brackets for re-attaching donkey’s side. next, i thought i’d weld these little tabs on. well i just couldn’t get the welder dialed in for the super thin metal. i’d either burn right through or not get any penetration – no happy medium. 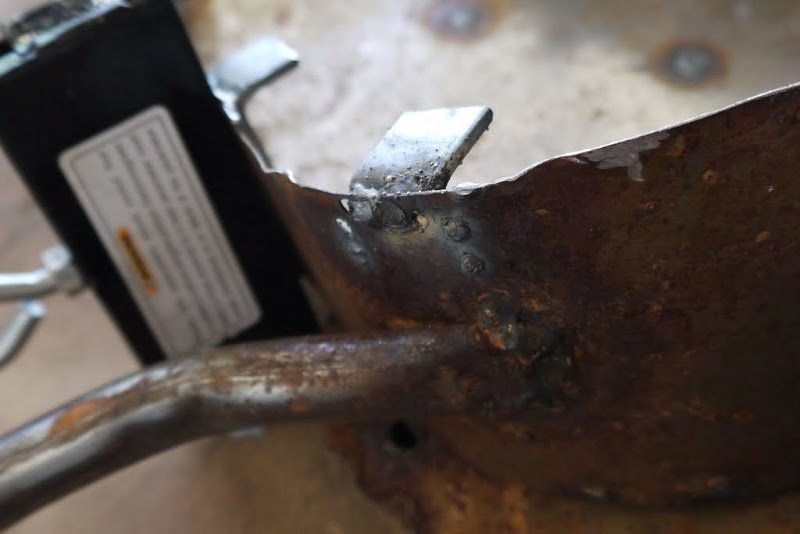 a couple of my tabs even broke off while i was drilling the holes in them. so JB Weld to the rescue! i used magnets to hold my tabs that came off in place and applied the JB Weld generously. i went ahead and slathered some on around all the tabs.

random story time: back in the college days, i once hit something large and metal at 85 MPH near Quartzite in the middle of the night in my lowered Jetta. it broke the mount holding on my power steering pump, tore the 90* hose fitting off, and generally left me screwed. i don’t know what it was, it may have been Death Burro’s dead beat dad. anyway, i had never heard of JB Weld then, but my friend who was with me knew all about the magic sauce. we managed to fix both broken parts, eat dinner slowly while it dried, then drive the rest of the way to L.A. we drove pack to PHX a few days later, and then i drove around for another couple weeks before getting it all fixed with new parts. JB Weld held the whole time… love that fricken stuff! 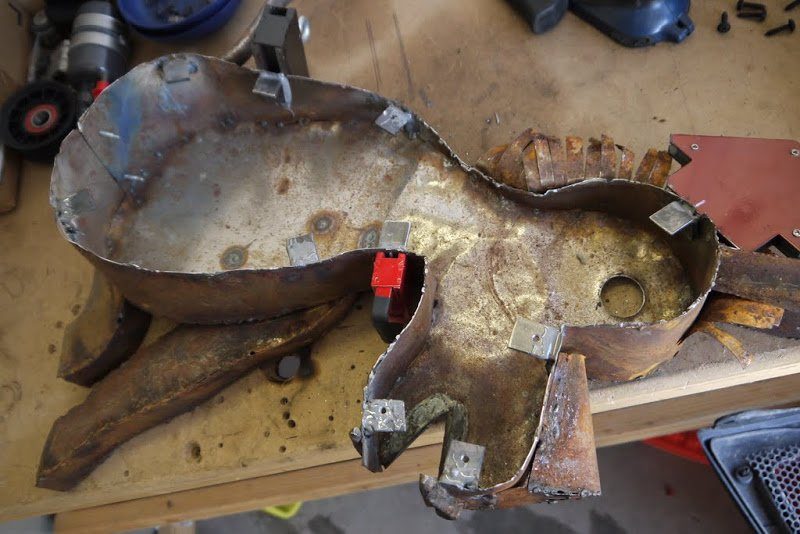 the final step was drilling holes in the side-panel and tabs for screws, so that i can re-assemble the donkey when i’m all done giving him precious life and junk.

you may have noticed the gaping shotgun-hole-sized wound in donkey’s head above. fear not, “he has a plan for you.”

since the light-through-the-weld-burn-holes didn’t seem to work, i needed some other way to let-it-shine, this-little-lite-of-mine. yes, donkey’s getting holy. i drilled quite a few “photon purge points” into him, and covered them with a screen mesh so that some light can escape but he hopefully will still look “complete” in the end. 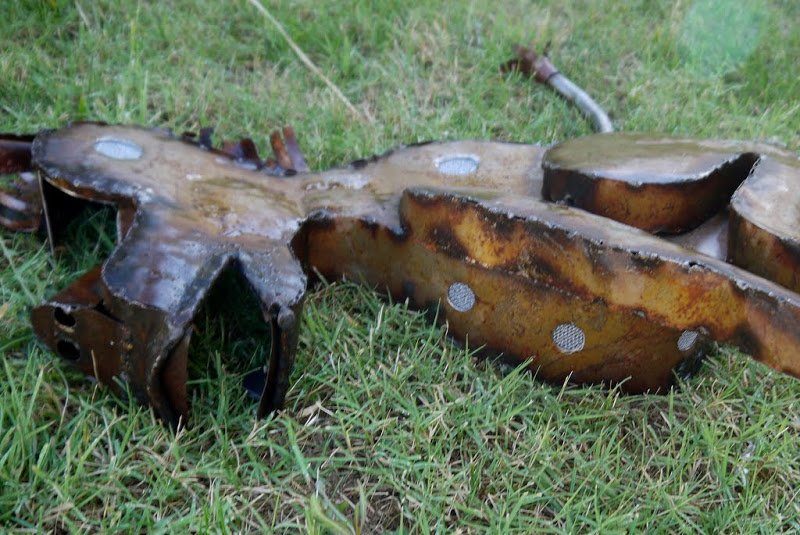 the other reason behind this was to allow for heat dissipation. yeah, you probably shouldn’t throw some electronics and a bunch of lights inside a small metal box and not give it breathing holes.

for the mesh, i bought some metal screen from Holmes Depot and cut out little squares. i used 2 squares on each hole, rotated 45* from each other to create an even finer mesh. Amazing Goop was the glue of choice for this step.

the keen eye will have noticed that donkey is wet in some of the pics above. all the cutting, drilling and de-burring left too many shiney metal spots that stood out from the rusty/rustic look. so i hosed him down several times a day for a couple days and let him rust back up nicely.

is all this junk gonna fit inside the littlest donkey? 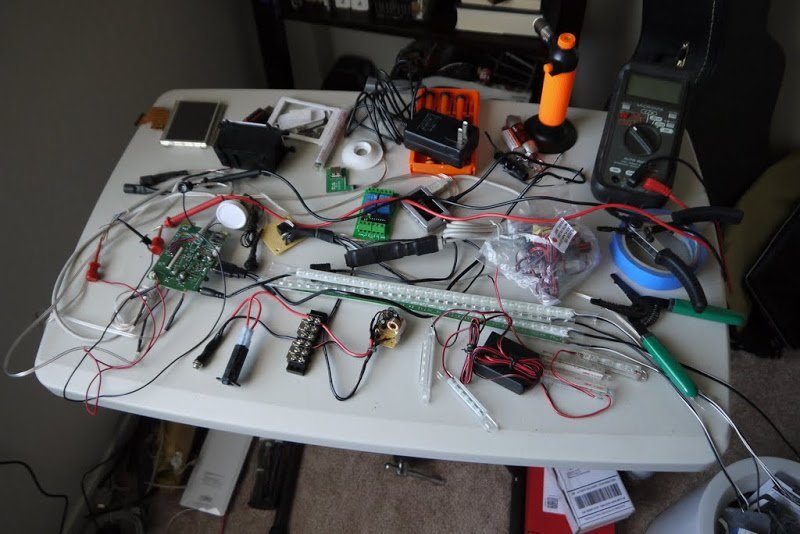